HOW YOU CAN HELP
$0.00 Cart
Let's fundraise
Buy a gift
Donate today
Menu

Main Roads will manage the design and construction of the bridge and meet the ongoing maintenance needs for the bridge. It will work collaboratively with the Child and Adolescent Health Service, Botanic Gardens and Parks Authority, QEII Medical Trust, the City of Perth and the Perth Children’s Hospital Foundation. Work has already begun on the bridge design and Main Roads is working closely with all stakeholders to seek mandatory approvals.

Coincidentally the children said having easy access to Kings Park via a bridge over Winthrop Avenue would give them much needed respite and distraction from the rigors of their medical treatment and some reprieve from their clinical environment. There is strong evidence that the power of nature in healing is enormous: a range of therapies in natural settings are evidenced to contribute to the wellbeing and recovery rates of sick kids.

QEII Campus staff will also benefit from the bridge through increased access to existing cycling paths and pedestrian travel to work and the ability to use the park for fitness, lifestyle and work break activities.

The construction of a pedestrian bridge that begins from the Northern Greenspace directly adjacent to the Perth Children’s Hospital site to Kings Park addresses the opportunity to provide safe access to sick kids and their families and QEII Campus staff to this outstanding natural environment. In addition it would broaden access for pedestrians and cyclists who currently don’t use the Park for commuting purposes.

The project includes a single span, pedestrian and cycle structure over Winthrop Avenue and associated paths connecting Hospital Avenue on the QEIIMC Site with the May Avenue Parkland located in Kings Park.

The existing dual-use path running parallel to Winthrop Avenue from the point at which the new bridge will land through to the May Avenue Parkland will be changed to pedestrian-use only, and upgraded to make it suitable for those temporarily or permanently impaired. This will have minimal impact on Kings Park. On the QEIIMC site, the bridge will connect into the elevated section of the Northern Green Space between the Perth Children’s Hospital and the multi-deck car-park.

Design engineers AECOM have been appointed to review the current design of the Kids’ Bridge to reflect cost expectations and incorporate specific requirements from key stakeholders.

A construction tender will be called when the final design is approved, with the successful builder expected to start in late 2020. The new pedestrian Kids’ Bridge is expected to be completed and unveiled in the second half of 2021. 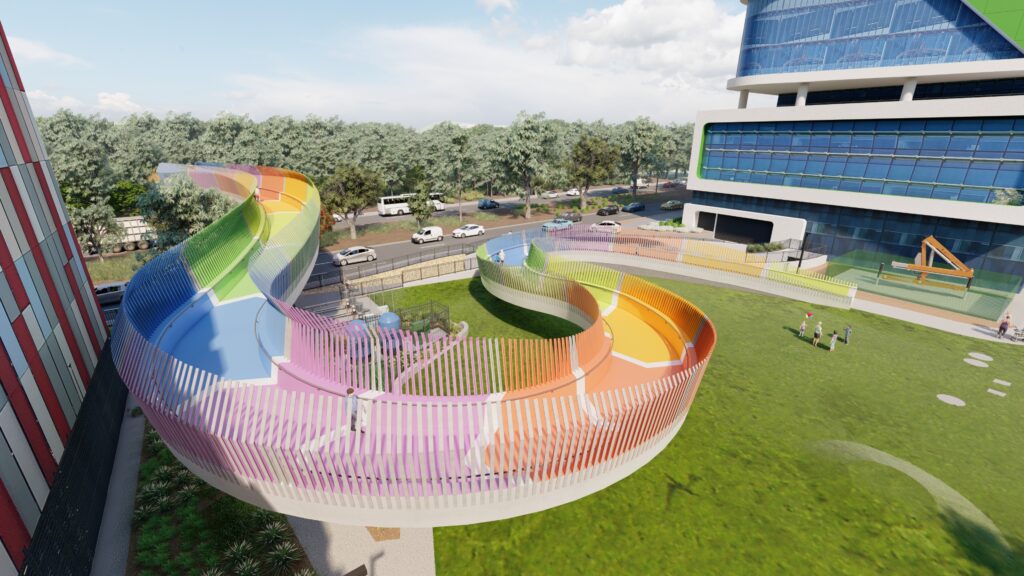 Kings Park site preparation
Vegetation directly affected by the bridge project will be removed and/or relocated. The Botanic Gardens and Parks Authority (BGPA) is undertaking the vegetation works as they have the expertise to manage this closely. Where possible, vegetation has been prepared and will be relocated within Kings Park. Where relocation is not possible the material will be mulched and recycled within the park.

Work hours and frequency
Works will be undertaken between 7am and 7pm on several weekdays through to the end of December. Main Roads don’t anticipate road closures or excessive noise associated with any of the planned works. At times the footpath adjacent to Winthrop Avenue on the Queen Elizabeth II Campus side may be re-routed during cabling works.

Why is so much money being spent on building a pedestrian bridge over Winthrop Avenue? Surely the money could be better spent on medical research to prevent kids getting sick in the first place?

The Kids Bridge will provide sick children who are in PCH (and their families) with the opportunity to escape the rigours of their hospital stay by safely visiting Kings Park. Clinicians strongly agree that providing the opportunity to visit places like Kings Park is positive for sick children’s overall health and wellbeing. Health benefits will also be realised for campus staff through increased access to existing cycling paths and pedestrian travel to work, and the ability to use the park for fitness, lifestyle and work break activities.

Why was the Bridge delayed for so long?

Bridge project commenced in 2012 but was put on hold due to prioritising the more important build and transition into the new Children’s Hospital.

Are taxpayers paying for this Bridge?

The Perth Children’s Hospital Foundation are paying for the bridge design and construction through the generosity of private donors.  The construction project management and ongoing maintenance costs of the bridge will be met by Main Roads bridge and road maintenance budget.

What is Main Roads' role?

Main Roads will project manage the design and construction and meet the ongoing maintenance needs for the Bridge.

How is the environment in Kings Park being managed?

The Botanic Gardens and Parks Authority (BGPA) has been engaged for some time regarding the concept design.  Main Roads is working with BGPA representatives to minimise the project footprint on flora and fauna in the park, and will be seeking their board’s endorsement of the design in the coming weeks.

Will trees and vegetation have to be removed to accommodate the new crossing?

Yes, trees and some vegetation will need to be removed for construction purposes.  Main Roads will continue to work with the BGPA to manage the implications to vegetation within the park, and the City of Perth for verges and medians on Winthrop Avenue.

Why has AECOM been appointed to develop the design of the Kids Bridge when you already have a bridge design?

AECOM has been appointed to develop the final design of the Kids Bridge with a focus on project management, costs and constructability requirements and to incorporate key stakeholder requirements.

So what is the budget that AECOM has been given?

AECOM competitively tendered for the bridge’s detailed design work, nominating the design cost as part of this process.  The cost of building the bridge will be determined as part of a competitive tender process for construction.

There was an original bridge design cost estimate. Is this still accurate?

The Perth Children’s Hospital Foundation is strongly committed to building the new Kids’ Bridge.  We will wait to see what final costings are presented to build the new Kids’ Bridge as part of the competitive construction tender process, however, initial cost estimates of the current concept design are below previously quoted figures.

When are construction tenders likely to be called for the new Kids' Bridge?

Construction tenders will be advertised in the second quarter of 2020.

When do you hope to start construction of the Kids Bridge?

Following the completion of the construction tender assessment in late 2020.

When do you hope to finish construction of the Kid Bridge and have it opened for kids to use?

How will the Bridge be built?

Details about how the bridge will be built will be confirmed once a final design is completed towards the middle of 2020.

What traffic impacts will the construction have on Thomas Road? On Kings Park?

The successful construction contractor will determine the construction program for the bridge in the future including any traffic impacts.  More information regarding traffic and implications for Kings Park will be available later in 2020.

Where will the bridge rise from the Perth Children’s Hospital site and where will it land in Kings Park?

Based on present planning, the new Kids Bridge will connect the grassed area between Perth Children’s Hospital and the multi-storey car park to the adjacent Kings Park bushland and a short walk to May Drive Parkland in Kings Park.

Will local residents be affected?

What organisations are involved in the Kids Bridge Project?

What approvals are required for the Kids’ Bridge to proceed?

Main Roads will seek formal project approvals from the Botanic Gardens and Parks Authority Board and Queen Elizabeth II Medical Centre Trust Board as the detailed design progresses.  A Development Application will also be submitted to Western Australian Planning Commission during the detailed design process.

Will the bridge have feature LED lighting?

Feature lighting opportunities will be investigated as part of the detailed design process.

Does the Fratelle Group remain involved in the project?

The Fratelle Group provided early concept design materials in-line with the requirements of the Department of Health led competition they won some years ago.

While Main Roads obtained the State-owned intellectual property from the Frantelle Group during early concept design development the AECOM design concept has a more conservative focus on the project management and constructability requirements of the future bridge.