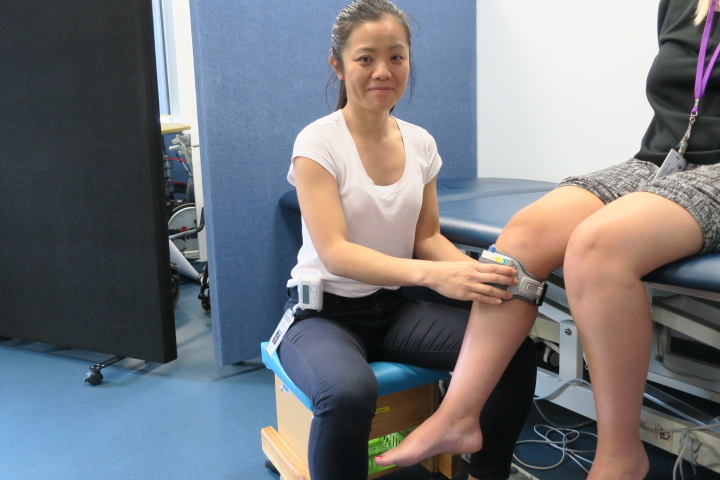 Every 15 hours, an Australian child is born with Cerebral Palsy. Thanks to the generosity of Perth Children’s Hospital Foundation donors, research is currently underway to find new and innovative ways to provide treatment to children and adolescents with cerebral palsy.

Cerebral Palsy is a movement disorder that affects people in different ways and can impact body movement, muscle control, muscle coordination, muscle tone, reflex, posture and balance. Although cerebral palsy is a life-long condition, some of these signs of cerebral palsy can improve over time.

Over the past four years, physiotherapist Dayna Pool and her research team have conducted and published numerous studies to establish the effect of an electrical impulse device to improve children’s ability to lift their toes, rather than using the rigid brace. They have been highly successful in improving walking ability, strength and balance in a group of 32 children and teenagers, of which William was one.

“ The first time Will tried on the device, he didn’t really like the sensation of the electrodes, but he soon got used to it and now doesn’t even notice them,” explains William’s mum, Anne.

His walking has improved so much. He wasn’t able to put his heel on the ground at all, but with the new technology, his heel nearly touches the ground and he walks with a swagger!

William wears the device for four weeks and rests for four weeks. Anne says that you can see the benefit it has had on his right leg.

“It has definitely helped Will to raise his foot and provided better walking ability. He is very self-conscious about wearing it to school, but we do a lot of walking before and after school to compensate. It’s been amazing.”

Additional funding has paved the way for the Next Steps Project, where the devices will be made available to more children like William with cerebral palsy, acquired brain injuries and spinal cord injuries. The team will establish consumer and clinician groups to raise awareness of the project and provide training. The hope is that more children both nationally and internationally will be able to consider the use of this treatment.

As one of the participants in the initial research, William will be giving Dayna and her team regular updates on his progress and providing them with feedback on the publications they are producing for families as a part of the Next Steps Project. Having someone with experience in using the device ensures that the information can be clearly understood by all future patients.

“This project has been life-changing for Will. We are so thankful to the Foundations and their donors for funding it,” says Anne.

“Will is more than happy to help Dayna with the Next Steps Project as he knows it will help so many others.”